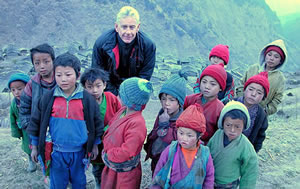 On my last night in Nepal, I sat down next to Scott MacLennan in the living room of the Mountain Fund volunteer house in Kathmandu. During my two months in Nepal, MacLennan and I had discussed a number of things: the circumstances that led to his founding of the Mountain Fund; the work the organization does to improve healthcare, education and human rights in Nepal; the obstacles he faces daily due to a new, fragmented and often stagnant Nepali government. However, as I sat on the couch that night, I quickly realized that the circumstances weren’t quite right to continue such a serious dialogue. We were sitting in the middle of a dance party.

Despite the serious cause that drives his work in Nepal, MacLennan has the unique ability to bring much-needed levity to a volunteer experience in the developing world.  In the house that night, volunteers from the United States, Canada and the UK danced to American and Nepali pop music with MacLennan’s family and his dedicated Mountain Fund staff – an ever-growing group of young Nepali men and women whom MacLennan has welcomed into his life and provided with a loving home, access to a good education and the chance for a more promising future. All around us, the house thumped with the beat of the music and laughter filled the room.  For everyone there, the night served as a brief respite from the immense challenges that the Mountain Fund faces. Come morning, MacLennan, his staff and his team of volunteers would again continue carrying out the Mountain Fund’s mission: to ease suffering and stimulate social change in one of the poorest countries in the world.

Fifteen years ago, Scott MacLennan knew as much about Nepal as most people in the developed world likely know today.  An avid outdoor enthusiast and former mountain climber, MacLennan knew Nepal was home to many of the world’s tallest mountains and, at an early point in his life, even dreamed of climbing the tallest of them all in Mt. Everest.  He knew Nepal was a poor country, of course, but, at the time, MacLennan was busy with his life in Albuquerque, New Mexico, fully committed to building his real estate business and providing a good life for himself and his family.  However, a small favor for a friend in need would quickly bring the day-to-day struggle of the Nepali people into stark relief and, in turn, change MacLennan’s life forever.

MacLennan agreed to serve on the board of directors of a non-profit organization started by a close friend in memory of Anatoli Boukreev, a professional mountain climber from Russia who died tragically while attempting to climb the south face of Nepal’s Annapurna I.  To this day, the Anatoli Boukreev Memorial Fund provides promising young climbers from poorer countries around the world with grants that enable them to climb some of the world’s tallest and least accessible mountains—many of which Anatoli triumphantly summited during his illustrious career.  Through his work with this organization, MacLennan soon discovered just how desperate the people of Nepal really were.

According to a recent World Bank survey, Nepal is the poorest country in South Asia and the twelfth poorest country in the world.  Roughly one-third of Nepal’s 40 million citizens fall below the poverty line. Child malnutrition hovers at 40 percent, and most people don’t have access to a decent education, leaving Nepal with a literacy rate of 60 percent.  Agriculture serves as the primary industry of an economy that contributes to an average income of about U.S. $200 per year.  More than 80 percent of the Nepali people live in rural mountain villages where, although some electricity and basic technologies have been introduced, life is lived much as it has been for centuries. Most villagers still live and eat in unsanitary conditions, often in close proximity to their livestock, and have no access to basic healthcare. Child mortality is commonplace and frequently caused by minor health issues that are easily treatable in the developed world.

MacLennan is working to bring change in Nepal.  Since its founding in 2005, the Mountain Fund has established a number of initiatives that are geared towards improving the state of education, healthcare and gender equality for an ever-growing list of Nepal’s rural and urban regions.  In addition to setting up a number of permanent clinics that now provide basic healthcare to villagers in Nepal’s Rasuwa District, an eight-hour drive north of Kathmandu, the Mountain Fund offers a bi-annual “Medical Trek” that teams-up doctors, medical students and non-medical personnel for a 10-day trek through some of Nepal’s more remote villages while conducting temporary health clinics along the way.

This past April, I had the privilege of being a part of the most recent medical trek that saw our team hike through six different villages among the tiered, lush-green farmlands and massive, glacial Himalayan peaks of Nepal’s Langtang Valley. Lacking any medical training, I was at first concerned that I wouldn’t be able to effectively assist any of the villagers’ needs. However, with basic math skills at my disposal and a willingness to read the poor penmanship of my medically trained teammates, I was quickly able to make myself useful working in our makeshift pharmacy, handing out prescribed medications to each of the 700-plus patients we treated in the region. Unfortunately, we didn’t have an eye doctor or a dentist with us, as other treks have had in the past, but our team was able to introduce the Mountain Fund’s new portable ultrasound machine, a device that allowed a few village women to check the health and progress of their pregnancies.

Along the way, the villagers we met did their best to show their appreciation for our visits.  Some simply shared a shy smile; others looked us in the eyes, their hands in prayer position, and voiced a sincere “Namaste”: a common greeting in Nepal that roughly translates to  “the spirit in me respects the spirit in you.”

In addition to the medical treks, the Mountain Fund also directs volunteers and donations to a number of different local organizations including hospitals, schools and a women’s empowerment center. With each initiative that he coordinates, MacLennan will be the first to admit that he can’t do it alone.  To help him carry out his mission here in Nepal, he has been fortunate enough to partner with a number of passionate Nepali individuals who are equally determined to bring change to their struggling country.

There exists another harrowing reality for thousands of single mothers in Nepal: Many are left with no choice but to place their children in orphanages in hopes of giving them a better life.

During Bina Basnet’s seven-year tenure at Bal Mandir, the largest orphanage in Nepal, she was confronted with this horrific struggle all too frequently. In 2006, Basnet felt called to act and decided to start Orchid Garden Nepal (OGN), a daycare and school that is giving these families new hope for the future. Thanks to her tireless leadership in combination with the support of the Mountain Fund and other foreign donors, OGN has transformed from a small daycare for 15 children in a tiny rented room into an impressive elementary school consisting of three classroom buildings, an edible garden and a brick-paved playground. Sixty preschoolers, kindergarteners and first graders now attend OGN each day to receive a quality education. And thanks to the support of the Mountain Fund and other foreign donors, OGN is able to admit roughly 80 percent of its current students free of charge, allowing struggling mothers to work during the day and make enough money to provide their children with a decent meal in the evenings. OGN not only provides a positive, nurturing environment for these children, but also gives their mothers a chance to help pull themselves out of poverty, empowering them in the process.

During my last two weeks in Nepal, I had the privilege of meeting Basnet and helping out at OGN. A believer in allowing volunteers to assist in ways in which they excel, Basnet allowed me to tackle some of the school’s needs with exterior painting – a trade I worked in for a number of summers in Cleveland to help pay for college. One evening, on the steps of the schoolhouse, just in front of a newly painted railing, I sat down with Basnet to enjoy a cup of Nepali tea.  “I’ve been blessed to meet very good people like Scott and others who help me do what I can to help,” said Basnet, staring out over the playground, now empty and quiet under a twilight glow. “I am just doing what is in my heart and hoping it can be enough.”

Although her home is only a 20-minute walk from the school, Basnet often works well into the evening, making it difficult for her to walk home to her family through Kathmandu’s labyrinth of crumbling roads and narrow alleyways. Most nights, Basnet chooses instead to sleep in her small rented apartment, just next to the school grounds, in order to maximize her time at the school.

Plans to add higher grades at the OGN are in the works, but until then, Basnet is doing all she can to make sure her “orchids” continue to blossom, receiving a rounded education. Once each child graduates from OGN, Basnet works to find sponsors to provide each child with scholarships that allow their education to continue until the age of 18.  Amazingly, roughly $200 US dollars can provide a child with a full year of education at a private school in Nepal.

"I am the Mountain" is a slogan printed on T-shirts, water bottles, stickers and other gear that MacLennan has made to help raise money for the various initiatives supported by the Mountain Fund. Bold, yes, but this slogan perfectly embodies the mindset needed to confront the staggering amount of adversity that comes with pursuing humanitarian work in Nepal.  Although he never did climb Mt. Everest, MacLennan now climbs a mountain of his own.  Slowly but surely, one step after the other, he leads a determined group of individuals toward a seemingly insurmountable summit: a better future for Nepal.

Scott MacLennan, Bina Basnet and their supporting staffs are addressing the problems of Nepal simply because they’ve discovered something they could do to help and decided to do it.  In our ever-globalizing world, made smaller everyday by technology and the heightened awareness that comes with it, the world’s problems are quickly becoming more and more our own, simply because there is, so often, something we can do to help.  And when each of us finds our something, we can be inspired to act by looking to people like Scott and Bina.  As they continue to climb their climbs, they also lead by example, serving as our guides and showing us the way.

Special thanks to Scott, Bina and the rest of the Mountain Fund staff for making me feel at home during my time in Nepal.